The Blooming of the Bloodroot

Early spring heralds the blooming of woodland flowers and the awakening of bees. Most native bees are solitary and overwinter either in cocoons or as dormant adults. Even some butterflies, such as the mourning cloak, overwinter as adults. The warm rays of the sun lull the bees from their slumber coaxing them to seek out sustenance from the emerging spring ephemerals that bloom on the forest floor. Early blooming flowers have less competition in seeking the attention of pollinators and some flowers have even foregone the effort to produce nectar, an expensive output strictly produced to lure in pollinators.

Consider the bloodroot (Sanguinaria canadensis), a member of the poppy family, that offer only pollen and no nectar to pollinators. The first warm days of April signal a stem to rise up from the earth and a single green leaf unfurls revealing the white petals and yellow stamens of the flower. This whole package fully formed the previous year, patiently waits out winter beneath the forest floor. The bloodroot flower opens first in the female stage offering no nectar, relying on pollinators covered in pollen to land and dropping pollen to the receptive stigma. Within a few hours of opening the stamens begin to release pollen. The flower will open for up to three days or until cross pollination has occurred. Once pollination has occurred the flower begins to drop its petals.

The bloodroot flower only opens on sunny days when the temperature reaches 46 degrees when pollinators are active. The flower seeks cross pollination from insect pollinators, particularly native solitary bees like mining bees (Andrena spp.). Many of these these bees tend to be dark colored to absorb the warm rays of the sun. These bees are most active with temperatures of 55 degrees or greater. Below these temperatures many species of flies act as secondary pollinators. Other bees also visit the flowers including metallic green sweat bees (halictus spp.). Pollen is an essential source of protein that bees use to feed their young. Even without nectar, the bees take the flowers offering. 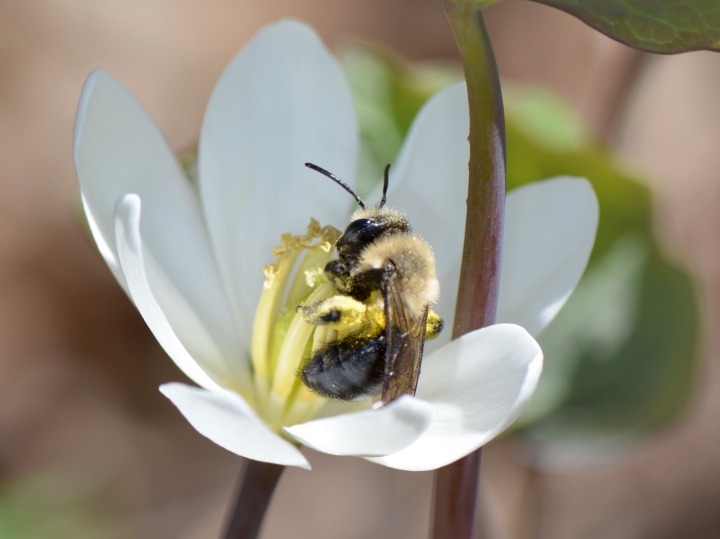 Bees belong to an insect order called Hymenoptera which means membrane wing. This is the same insect order in which ants belong. Spring ephemerals including trout lilies, trilliums, ginger, hepatica and spring beauties have a strong dependence to bees but also ants. The bee for pollination, the ant for transporting the seeds. The seeds of many spring flowering plants have a sweet oil rich substance called elaiosome a favorite food of ants. The ants carry this back to their nest where they eat the elaiosome and discard the seed where it is allowed to sprout into a new generation of plants. 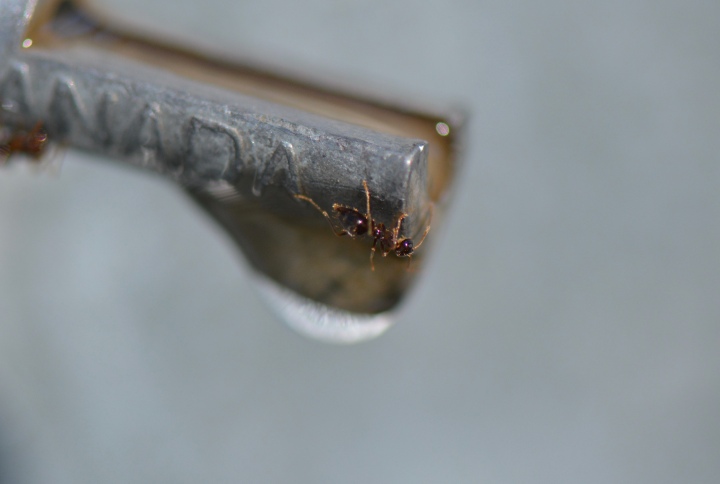 Ants are drawn to maple sap and the sweet eliosomes on seeds of spring ephemerals.

Bloodroot is not a true ephemeral since their single leaf does not whither up and disappear once the tree canopy shades the forest floor but rather the leaf grows and persists until late summer. Beneath this unique leaf the root is blood red (even the stems bleeds red) as its name implies and there is an alkaloid known as Sanguinarine which has been shown to have anti bacterial, anti-fungal and anti-inflammatory properties. It is used as an ingredient in some tooth paste and mouthwashes for killing oral bacteria and plaque leading to tooth decay and gum disease. Recent research from the University of Wisconsin has revealed potential cancer fighting properties, specifically for skin cancer. The plant has long been known for its medicinal properties used first by Native Americans that would mix a few drops of the root juice with a lump of maple sugar to produce a cough drop.

Seek out bloodroot in rich moist soils of unspoiled woodlands. It is equally to begin your search on the first warm days of spring to be sure to spot this quick blooming flower. The lucky observer will be fortunate to witness a spring bee gathering pollen that they will transport back to their nesting chambers to feed another generation of bees.

Cellophane Bees; The One Who Glues

In the Shadow of the Honeybee