Do beavers play a role in providing habitat to native pollinators?  Today, pollinators benefit from roadside flowers, old farm meadows, hedgerows, forest edges and gardens, however, these are all by-products of modern human civilization.  What about prior to European colonization of North America when nearly 99% of New York and the Northeast was covered in forest.  Where in this dense forest did the 477 native pollinators of New York find the diversity of flowers necessary to sustain their appetite for pollen and nectar?  In the spring, the woodlands are abloom with a variety of spring ephemerals, most trees bloom in the early spring providing an abundance source of food.  Later season flowers certainly bloomed along river and stream corridors and along lakesides.  However, one very reliable source can be attributed to the industrious efforts of beaver; nature’s engineer’s create ponds and wetlands within dense wilderness landscapes, that when abandoned become wild meadows.  This most certainly benefited native pollinators.

By 1640 most beaver were extirpated from New York State and by 1903 only one Adirondack colony remained.  In their absence, it was discovered that they were a keystone species on which many other species were dependent such as wood ducks and pileated woodpeckers.  Prior to the European’s voracious appetite for beaver fur, the North American beaver population had impounded an estimated 85,000 acres of water equivalent to the surface area of four Great Lakes: Lake Superior, Huron, Michigan and Ontario!  Today, beaver have made a successful comeback repopulating many of their old haunts.

The Abandoned Beaver Dam in early May.

This blog has been an on-going study of one abandoned beaver dam and the associated beaver meadow in the Indian Head Wilderness in the New York Catskill Mountains.  Return trips revealed blooming wildflowers and their associated pollinators of this beaver meadow that is over one mile from any road or other man-made features.  Most native bees have a flight range of less than one mile, so this makes an ideal location to learn about pollinators in a pre-European forest.  While the spring ephemerals were in bloom, two queen bumblebees were seen and a few mining bees.  Lets see what the summer reveals.

Early May (May 10th) to Early June (June 13th) revealed a big change to this beaver meadow.  The walk through the wilderness forest revealed few flowers in bloom while thickets of blackberries were in blossom.  The flowers attracted a variety of bees and wasps including a species of sweat bee, a species of mining bee and a potter wasp.  A few species of butterflies were present including a yellow swallowtail.  In the weeks to come a variety of other flowers will bloom as   the season progresses.

July 16th, 2015 was a mild summer day, low humidity with temperatures in the 70’s.  Rough cinquefoils were in full bloom across the beaver meadow and enjoyed by a variety of hover flies, skipper’s and small solitary bees. Orange jewelweed was just beginning to bloom and variety of other other plants such as swamp milkweed, common boneset and  false sunflower will bloom in the coming days.  A painted lady butterfly found my camera lens more attractive than the flowers.  The most notable insect was the diversity of dragonflies and damsel flies.

August 27th reveals a wild flower experience beyond imagining!  The transition from early spring to late summer reveals an unparalleled transformation.  The outline of the dam is covered in boneset and orange jewelweed while the spillway leaving the dam has ironweed, Joe-Pye weed, false sunflowers, goldenrod and a variety of woodland asters that dissipate into the shadows of the forest.

One of the most impressive displays was the aerodynamic acrobats of a few hummingbirds as they chased one another through the sky.  Occasionally, they’d stop to sit on a branch or visit some of the orange jewelweed to recharge their energy reserves.  The jewelweed also attracted the attention of yellow jackets, a predatory insect that actually enjoys the sweet nectar hidden deep inside the petals.  After some time, observing the activity of this yellow banded wasp, I discovered thier nest, they had built within the old dam.  These social wasps lined up at the entrance waiting their turn for take off while others flew in for a landing. 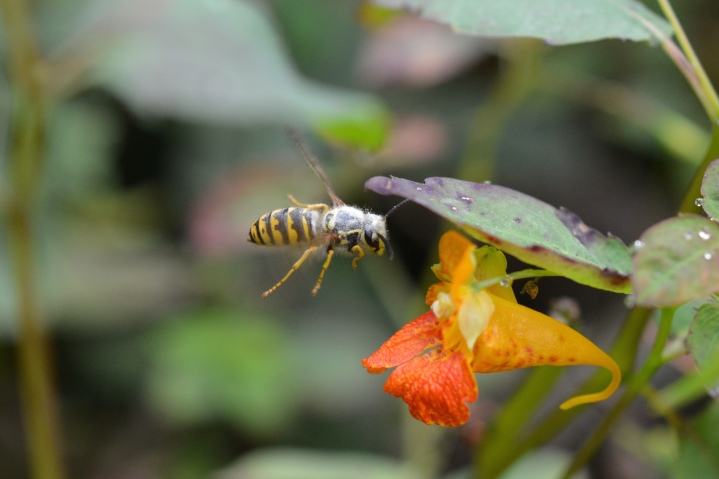 The most prevalent bee on this cool summer day (temperatures in the low 60’s) was the bumblebee that enjoyed the banquet of flowers offering up their unlimited pollen and nectar. Bumble bees actually can fly at lower temperatures due to their ability to thermoregulate.  Despite the frenzy of activity, the day revealed no solitary bees and no butterflies at the beaver meadow on this trip.

It is evident that the disturbance offered by the work of beavers sets back succession, flooding the dark forest with sunlight, allowing for a diversity of plants to grow and thrive. The old dam as it decomposes, provides fertile well drained soil that allow certain plants to thrive, like Boneset and Joe Pye weed.  Other plants that require more moist conditions like jewelweed thrive in the wetter areas. Pollinators certainly do benefit for the industrious work of beavers or in the very least from the their abandoned achievements.

Note the Boneset that grows along the top of the old dam.

Cellophane Bees; The One Who Glues

In the Shadow of the Honeybee