On a recent canoe trip to the Adirondacks, a steady rain had passed over and the sun peeked through the clouds illuminating the aquatic vegetation. I took a moment to see if any pollinators were visiting the white water lily (Nymphaea odorata) and after seeing no activity I wondered who the might pollinate such an ornate flower. Though bees may visit them, beetles are the primary pollinators of this flower.  It was then I turned my attention to the pickerelweed, Pontederia cordata, that was in full bloom on this July day. 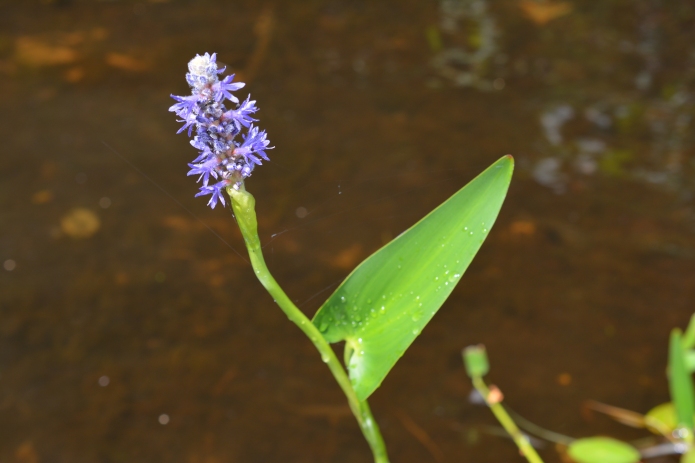 A closer inspection found the purple flowers crowded with flies and numerous small dark bees, maybe taking shelter from the rain. At first glance, the small bees could be mistaken for a type of mining bee (Andrenidae) but this particular bee is actually in the same family as sweat bees (Halictidae). It was placed in this group based upon mouthpart characteristics in 1944 by an entomologist named Michener.  This particular species of bee, known as Dufourea novaeangliae is a specialist and forages for pollen only on pickerelweeds. Less selective when it comes to nectar, they visit other nearby flowers. As far as I can tell it has no common name but if it did I’d imagine it could be called the Pickerel Bee.

These bees most certainly were males (absence of scopae, pollen collecting hairs on the hind legs) that emerge about a week before the females.

These solitary bees produce one generation per year and their emergence coincides with the blooming of the pickerelweed. The males emerge first in early July and the females emerge about a week later. They nest underground on the shore near the plant on which they depend upon. Though small bees, they have long tongues to better access the nectar. 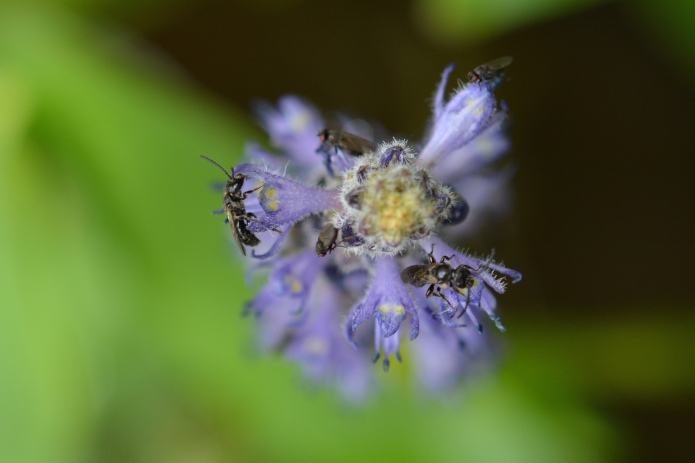 A study done in 1985 on Lake Ontario in Fair Haven Beach, New York was the first study to find and observe nesting sites of this species of bee. They found that a single larvae develops at the laterals ends of a sub-horizontal tunnel.  As for most solitary bees each female lays 6-8 eggs.  Larvae are provisioned with “bee bread” a typical food source for solitary bees. The larvae are morphological primitive and spin strong, two-layered cocoons in which they overwinter.  When the pickerelweed blossoms a new generation emerges.

Eickwort, George C., Penelope F. Kukuk, and F. Robert Wesley. “The Nesting Biology of Dufourea Novaeangliae (hymenoptera: Halictidae) and the Systematic Position of the Dufoureinae Based on Behavior and Development”. Journal of the Kansas Entomological Society 59.1 (1986): 103–120. Web…

Pickerelweed on an Adirondack Lake

The quest to find the European wool carder bee (Anthidium manicatum) will lead you straight to the nearest patch of lambs ear (Stachys byzantina). The male bees can be found […]
Carder Bees and Lambs Ear

The springtime forest comes alive with the woodland flowers blooming before the leaf canopy darkens the forest floor.  Many of these early blooming flowers provide the essential resources needed for […]
A Tale of Two Anemones

In the Shadow of Honeybees

As a beekeeper my greatest satisfaction is when my hives survive the winter. My favorite winter sound is hearing the steady hum of the honeybee cluster inside the hive on […]
In the Shadow of Honeybees

A Batesian Mimic, The Bee Fly

Flies (Diptera spp.) are an eclectic group of pollinators with many species that mimic bees.  The bee fly or humblefly is a perfect example of a batesian mimic, a harmless […]
A Batesian Mimic, The Bee Fly

Growing in the Hudson Highland wetlands, the buttonbush (Cephalanthus occidentalis) is at home alongside tussock grasses with roots growing in spongy sphagnum moss.   It thrives in full to partial sun […]
Buttonbush a Midsummer Favorite

Wave Hill in the Bronx is a 28 acre garden, an oasis that transports visitors to another world. The vista from the Pergola Overlook commands the attention of the Palisades, […]
Pollinator Haven at Wave Hill

The blue orchard bee (Osmia lignaria) is a fast efficient native pollinator of early spring flowers. In the apple orchard 250 to 300 of these powerhouse pollinators can do the […]
Osmia: Powerhouse Pollinators
%d bloggers like this: