The fortunate female carpenter bee reuses the maternal nesting chamber and often shares the same hole with her sisters to create tunnels within tunnels. The unfortunate others set out on their own seeking soft dry wood to begin their life’s work. One late May day, while sitting on my porch, I observed one such bee set to work marking out a spot. Using her power mandibles she began chewing a perfectly circular hole. After a days work, the hole was deep enough for her to sleep comfortably in her new chamber. She continued to work day and, by the sound of the chewing, night to create a nesting chamber suitable to lay her eggs. With sawdust raining down, the depth of the hole grew the length of her body each day. In a few days time she will have a suitable chamber to contain the 6-10 eggs that she will lay, half of which will be males. These will be all the eggs she will lay in her lifetime. Carpenter bees lay the largest eggs in the insect world. As a solitary bee she provisions each egg with a mixture of pollen and nectar (bee bread) and using sawdust creates a partitions between each egg. The eggs hatch and the newly emerged larvae eat the bee bread. After emerging from the cocoon, a new generation of carpenter bees emerge in August. The adult bees return to their nesting chamber to hibernate and await the warmer days and first flowers of spring. 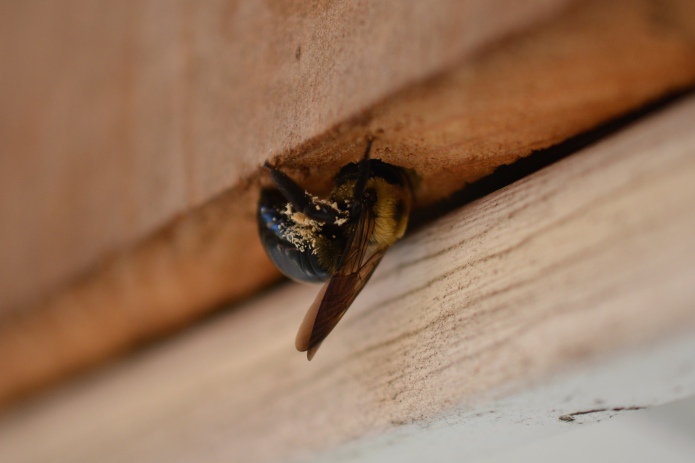 Male carpenter bees have a tell tale white patch on their face. They can be seen “guarding” the nesting areas with bravado. Hovering in place they wait to dive bomb other male bees or even an unsuspecting human. Don’t be fooled they are all bark and no bite; male bees lack the stinger of female bees. Their greatest power lies in the misconstrued fact that bees sting and this is enough to scare off the uneducated passerby. Like most solitary bees where every female is an egg layer, with no hive to protect, females rarely resort to using their stinger.

Native bees are known for their superior pollinating abilities especially of native plants like blueberries that benefit from a special pollination technique known as buzz pollination. The bee grasps the flower and shakes out the pollen. Though carpenter bees certainly can buzz pollinate they also are known for nectar robbing. Using their powerful mandibles they chew through the flowers creating a shortcut to gain access to nectar.

With so many varieties of bees in the northeast, there is only one species of large carpenter bee, Xylocopa virginica. They are easily identified from bumble bees by the hairless and shiny abdomen.

It is common knowledge that carpenter bees are attracted to man made structures and their work can be destructive. This seemingly domestic bee has adapted nicely to the modern conveniences of manmade structures. On a recent hike to Minnewaska State Park I found carpenter bees enjoying the wild blueberries blooming in the forest. It is here I got to wondering about the wild nature of these bees.

The trail known as Jenny Lane in Minnewaska State Park features scattered pitch pine that offer little shade and plenty of sunlight benefitting a dense understory of blueberries, mountain laurel and azaleas. Weathered and long dead trees stand as sentinels of a tragic past while a closer inspection reveals charred wood, evidence of a historical forest fire. In 2008, a fire known as the Overlooks Fire burned 3,100 acres in this section of Minnewaska State Park Preserve, the largest in the Shawangunks since 1947. In the wake of the fires destruction, life returned quickly to create the dense understory that can only be penetrated by the trail that meanders through the surreal landscape.

This forest type is a fire adapted ecosystem and is dependent upon periodic forest fires. Without fire the forest would transition to later successional species such as sugar maple and other hardwoods. Mid May is the season when a members of the heath family are in bloom that lure in a variety of pollinators such as honey bees, bumble bees, mining bees and the large carpenter bees. The carpenter bees were prevalent and living free in a wild landscape. The dead trees standing in the forest seem a logical substitute for the nicely planed lumber of manmade structures. Somewhere out there in the forest they were using their powerful mandibles to create their nesting chambers.

The quest to find the European wool carder bee (Anthidium manicatum) will lead you straight to the nearest patch of lambs ear (Stachys byzantina). The male bees can be found […]
Carder Bees and Lambs Ear

The springtime forest comes alive with the woodland flowers blooming before the leaf canopy darkens the forest floor.  Many of these early blooming flowers provide the essential resources needed for […]
A Tale of Two Anemones

In the Shadow of Honeybees

As a beekeeper my greatest satisfaction is when my hives survive the winter. My favorite winter sound is hearing the steady hum of the honeybee cluster inside the hive on […]
In the Shadow of Honeybees

A Batesian Mimic, The Bee Fly

Flies (Diptera spp.) are an eclectic group of pollinators with many species that mimic bees.  The bee fly or humblefly is a perfect example of a batesian mimic, a harmless […]
A Batesian Mimic, The Bee Fly

Growing in the Hudson Highland wetlands, the buttonbush (Cephalanthus occidentalis) is at home alongside tussock grasses with roots growing in spongy sphagnum moss.   It thrives in full to partial sun […]
Buttonbush a Midsummer Favorite

Wave Hill in the Bronx is a 28 acre garden, an oasis that transports visitors to another world. The vista from the Pergola Overlook commands the attention of the Palisades, […]
Pollinator Haven at Wave Hill

The blue orchard bee (Osmia lignaria) is a fast efficient native pollinator of early spring flowers. In the apple orchard 250 to 300 of these powerhouse pollinators can do the […]
Osmia: Powerhouse Pollinators
%d bloggers like this: